Origin Koro is in the Mahou region of the Ivory Coast. It was founded by El-Hadji Moussa Bakayoko between the 14th and 16th century He is given the title Mèman, meaning the Ancestor of all the descendants of the village of Koro. Meman El-Hadji Moussa Bakayoko went seven times on a pilgrimage to Mecca at a period in time when the journey was done on foot and in caravans! He is the Wèdji, that is to say, the Saint, who traced in the region the path of cultural and spiritual richness.

The name Koro, comes from a tree called Korokoro-soun (afrormoxia laxiflora) in the local dialect. It is as well near such a tree that meman El-Hadji Moussa Bakayoko founded his village.

At the foundation of the village, there was no source for water supply. Meman El-Hadji Moussa Bakayoko prayed and implored Allah Subhanahu wa ta′ala for water. In answer to his prayers, water miraculously gushed out of the ground near a termite mound at the entrance of the village. This miraculous spring became the river Yirima, a word meaning hope, is to be found at at the entrance of Koro. 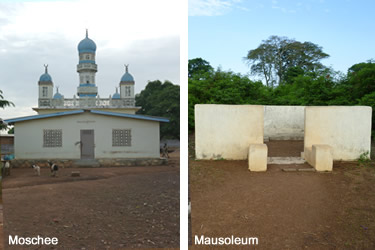 The village has housed for decades a modern mosque which was built by the community. Shako meaning under the Baobab tree was the predecessor of the cultural center as a gathering and discussion place for young people. The name Sia-koo is still in use today and is the site of the bus station in Koro. 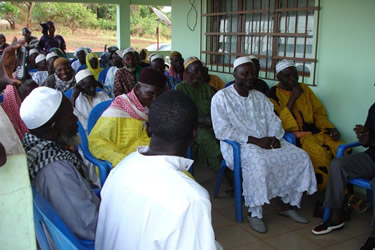 As is the custom in the Mahou and in Koro., traditional chiefdoms are attributed through a hereditary lineage. Village chiefs for Koro must be decendants of the Bakayoko, lineage which are descendants of meman El-Hadji Moussa Bakayoko. The aura of piety of meman El-Hadji Moussa Bakayoko reflects on the Bakayoko of Koro and the Mahou. They are considered great Koranic teachers.

In April 2013, Paul Niederhäuser was inducted as honorary chief of Koro and given the ceremonial name of El-Hadji Moussa Bakayoko, founder of the village. His wife was also honored and named Toumoutou Cherif, the wife of the founder. 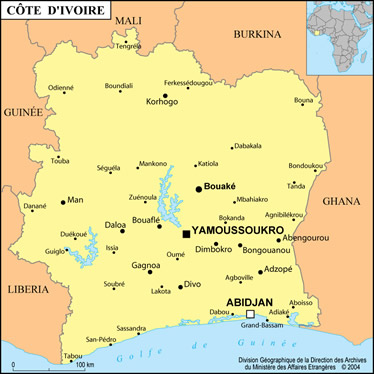 Koro is located about 40 km north of Touba near the border with Guinea. Cattle and sheep breeding, agriculture as well as trade are the main economic activities. The market takes place every Thursday. Exported crops are sugar cane, soybeans, rice and cashews.

Boronou-Koro in east Koro, has a sugar refinery in operation. The refinery and large plantations are located about 25 km from Koro and 47 km from Borotou. The complex became operational in 1978/79 and since 1997 it is managed by the private group Sucrivoire. The production is between 30 000 and 40 000 tons of sugar per year. The estimated number sugarcane plantations from the villages are 972.

The Griot [gRi‘o] (from french) is in parts of Western Africa, a professional singer, storyteller and poet that perform as well for entertainment. They use a special form of singing involving epic texts and instruments. Griots use oral tradition to pass on traditional knowledge.